I met Ltiriyan at the water wells in Laisamis, part of the Rendille lands of Northern Kenya. He was with nine or ten Rendille warriors relaxing in the heat of the day, and they happily sat around and talked with me through my guide for an hour or so before preparing their camels to head off into the desert again.
Ltiriyan was the most outspoken of the young warriors, and whilst he initially seemed aggressive, it emerged that he was in fact fascinated by the colour of my skin and hair. His fascination became barely containable when he noticed the blue colour of the veins in my arms, and after concluding that I had blue blood, it took my guide and I the next half hour to convince him I was not a visiting deity.

John Kenny’s work is all shot on location in some of the remotest corners of Africa. His images are all taken with natural light and in the subject’s day to day attire.
The C-type prints are mounted with an acrylic face mount giving them a 3-dimensional appearance and a contemporary look. 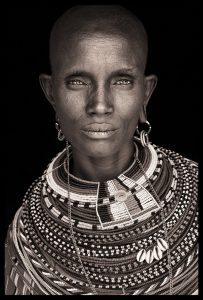 Waiting for the rains in Wamba