“Puro… alegría # V, a portrait of Graciela an icon of old Havana. The portrait was taken in 2001 on Plaza de la Catedral. Rachael’s use of paint interpretations bring alive her spirit.”
James Sparshatt

Photographer James Sparshatt and painter Rachael Dalzell are collaborating to create a series of “Neo Platinum” portraits.  The process begins with the production of a palladium platinum print of one of Sparshatt‘s Spirit of Revolution pieces which is then re-interpreted by Dalzell using the vibrancy of acrylic paints and her distinctive technique to  bring a new energy and appreciation. 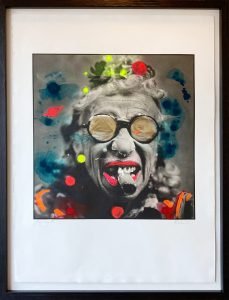